Five years ago today, the Webb Companies announced CentrePointe, a then-$250 million downtown Lexington development effort which planned to produce 900 jobs and the city's tallest building on one block in the center of the city. Citing the urgency of the project, the developers moved quickly to demolish several neglected-but-historic buildings on the block.

The developers made some cosmetic efforts to clean up the site, ultimately transforming the pit of demolition rubble into a tiny pasture, complete with horse farm fencing.  But actual construction never began. 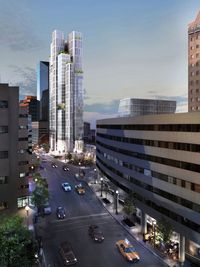 Over the past five years, the developers have repeatedly revised their plans and their explanations for delay.  At every revision, construction was imminent, slated to begin "60 to 90 days from now".

The financial and physical ambitions of the project have shrunk somewhat: the plans now call for a $200 million development which no longer includes the city's tallest building.  Instead of the hulking monolith of the first three designs, the developers are now pursuing a less-imposing design which promises to blend with the surrounding city much more effectively.

But approval for the developers' fifth major design iteration expires next week, and we've seen little progress on CentrePointe over the past year.

After five years, we have no economic activity on the site. No construction. No jobs. No building. No progress.

Over the years, we've been frequent critics of the CentrePointe project.  Those critiques have stood up well to history.

The fifth anniversary of the announcement of CentrePointe, as well as the expiration of the project's fifth design, seem like a good time for us to take stock of what Lexington should learn from the five years of failure with CentrePointe.

Hopefully, we can apply some of these lessons to CentrePointe (and to other major development initiatives in the city).

The developers lied.
They lied repeatedly. And with no trace of shame. It isn't a pleasant or polite thing to say, but Lexington needs to stop being polite to hucksters and charlatans.

And when their thick layers of lies wore thin, they resorted to insulting and bullying their critics instead of offering substantive rebuttals.

The logic behind TIF is that the increase in economic activity which stems from a new project will generate taxes that will - eventually - pay back the state and city for improving roads, sidewalks, utilities, parking, or other infrastructure around the project.

How'd this happen? CentrePointe's developers used wildly inflated projections to qualify for TIF, and few city or state mechanisms were in place to effectively challenge the developers' assertions.

And therein lies the problem with TIF more broadly.  Developers have every incentive to exaggerate their estimates of a project's value to the community. If the project comes up short of their rosy projections, developers still reap the benefits of TIF ("Free parking garage!"), while taxpayers and bondholders assume all of the risks.

Those supporting TIF programs often assert that only bond investors bear the risk of project failure.  But that rarely happens. As LEO's Joe Sonka meticulously chronicles with Louisville's Yum! Center (another state-sanctioned TIF program), the reality is that taxpayers are the true backstop when a project fails to live up to its projections.

TIF amounts to little more than an elaborate corporate-welfare scam.

With no downside risk, developers have no motivation to be realistic in their projections in their pursuit of state and local support, while state and local governments provide few checks on that runaway optimism.

Further, TIF provides developers with their infrastructure goodies now, and in exchange taxpayers and bondholders get a trickle of unreliable and unpredictable tax revenues over the next 30 years.

So far, the saving grace for the CentrePointe TIF has been that the developers have been unable to secure financing for the rest of the project, and haven't yet been able to invoke the state and city support needed to build the parking garage.

Financials trump design.
Perhaps because the design has changed so often, many CentrePointe critics - including us - spent much of their time obsessing on the project's design.  This was especially true when the design got good following Jeanne Gang's involvement in June 2011. Because the Studio Gang process was so inclusive, many in the community felt a sense of ownership of the resulting design.

And CentrePointe has never had a pretty business plan, even when it had pretty designs.

Big is fragile.
The state's agreement with the city specifies that at least $200 million be spent on CentrePointe by 2016 in order to qualify for TIF.

And the project's price tag has dutifully maintained that $200 million threshold over the past 5 years.

As a result, CentrePointe has always been big and complex; it contains residential, retail, hotel, and office components.  The viability of the project requires the success of all of these components - if any one fails, the whole project fails.

This is why the developers have had five years of trouble securing financing.  A project of this size and complexity is inherently fragile.

When projects get bigger and more complex, there's greater risk for something to go wrong. CentrePointe's size is a liability, not an asset.

And we lost, too. We lost a little of our city's history. We lost economic activity. We might lose even more if the project goes forward.

These are just a few of CentrePointe's lessons for Lexington. There are undoubtedly many more (for instance, I haven't delved into the project's many historic preservation failures here).

Feel free to add what you've learned over the past five years in the comments below.

Sadly, Lexington should have learned this lesson in the 1980's when the Webb brothers developed the Victorian Square and Festival Market fiascos. Shame on Lexington's leadership for letting the Webb's fool you not twice, but three times!!!

What's more, Jamie Millard of the Lexington History Museum was counting on the TIF money to help bring the museum to where it should be. He stated that the museum's official position should be that CentrePointe was a good thing. Rather than being an advocate for historic preservation and adaptive reuse, he wanted the city to tear town historic structures and demolish a piece of the city's history. Five years later, there's no CentrePointe, no TIF, and because of his bad leadership, there's no museum.

I left town, precisely because in endorsing this megalith over my cultural interests (music, say), it was the last thumb in the eye from Lexington's Old Money that I could stomach. I took my engineering degree with me. As did others. This diaspora of the educated continues.

I am totally opposed to the centrepointe project. Authorities need to make sure it never happens.
Please do not develop that charming pasture in the middle of town!

There are wasted developed buildings downtown that need to be used.

In other words, let us preserve green space and utilize the buildings we have.