IMPORTANT: Following my initial post yesterday, I found new and different information on parking costs for underground garages. Please see important updates at the end of this post.

Why does it cost twice as much as normal underground garages?

Over the past 7 years, I have publicly challenged many aspects of the CentrePointe project in downtown Lexington, with a particular focus on how the 700-space CentrePointe parking garage would be financed:

But despite all of my criticism of the financing for the garage and the viability of the entire project, I never thought to look at the cost of the CentrePointe garage itself. 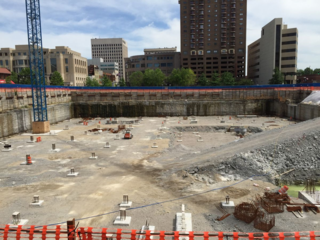 A couple of weeks ago, CentrePointe developer Dudley Webb addressed the Urban County Council [video link] to argue that the developers should not be forced to fill in the pit at CentrePointe. (His commentary begins at 26m:49s in the video. If you want to have a little fun before reading on, my response to Mr. Webb begins at 2h:12m:00s.)

In the course of his comments, Webb shared intriguing details about the finances and the challenges for CentrePointe.

In justifying the pursuit of TIF funding for the parking garage, for example, Webb casually dropped that the CentrePointe garage would cost $50,000 per space (largely driven by the requirement for underground parking). He claimed that "those numbers don't work".

At 700 spaces, that adds up to about $35 million for the entire parking garage.

That figure seems roughly consistent with other estimates on CentrePointe: The most recent publicly-available figures [PDF link] put the parking garage at $31.9 million, which worked out to about $45,500 per space.

The $50,000-per-space figure fits with the developer's propensity to throw out big, round numbers, but it isn't that far from what they've previously claimed.

So I didn't pay that much attention to it.

Yesterday, I was engaged in an online discussion about CentrePointe, and one participant asked me a number of pointed questions about how the parking garage worked.

That was when I realized that, while I knew quite a bit about the scheme to pay for the garage, I knew very little about the business model of the garage itself.

As I began to dig, I started to see that CentrePointe's parking garage is wildly overpriced.

As I looked at parking garage studies and parking garage construction from around the country over the past 5 years, one particular figure popped up again and again for the cost of an underground garage: $20,000 per space.

From Boston to New Jersey to San Diego [PDF Link - Outdated 2002 Study], local reports put the cost-per-space of underground parking garages at about $20,000. (One went as high as $21,000 per space.) [Please see updates to these figures at the bottom of this post.]

And yet, the CentrePointe garage appears to cost over twice as much as standard underground parking garages.

How can that be?

But the CentrePointe documents show the parking garage costing $31.9 million....

Where did that extra $17.2 million come from? Welcome to the Great CentrePointe Parking Garage Mystery.

As far as I can tell, there's never been a detailed public accounting of the costs of the garage, so I can't tell you where these phantom 'costs' came from.

But I can speculate. There are a couple of likely candidates:

And for over seven years, it seemed that no one noticed.

In either case, however, the result would be the same: The developer would get to pocket an extra $17.2 million funded with our tax dollars.

But why does that really matter?

It is time to ask the developer sharper questions about the cost of his parking garage.

IMPORTANT UPDATE: The $20,000 per-space amount is not as universal as I initially found. Other studies show per-space costs for underground parking ranging from $25,000 to $35,000 per space [Both PDF Links]. (It is worth noting that the author of the latter study has made developer-friendly arguments campaigning against off-street parking requirements - i.e., parking structures like CentrePointe's garage.)

I apologize for not finding these sources before the original post. I don't want to mislead anyone. I do want to understand these costs better.

While these amounts would change the magnitude of the amounts I calculated above, they don't change the core critique of the parking garage for CentrePointe.

Factoring in these new amounts, it seems that CentrePointe's parking garage is still overpriced by between $10,000 and $20,000 per space, which amounts to extra costs of between $7 million and $14 million across the whole project.

Many people that I know thought that the green space that had been there was
very nice. It seemed that the community
used it quite often for lots of fun events that brought people downtown. We really don't need Center Point there.
The current business spaces that are not being utilized downtown should be filled first and foremost. A new venture will only take away from those spaces.
I'm sure that there are lots of people in Lexington that share my same sentiment.
I hope the hole will be filled.

A few things + and - to consider. Boston in particular and NJ comparative costs probably don't have the limestone we have here, and that could be a very large cost difference.
OTOH, I expect parking costs in Boston and parts of NJ are high enough that the payback is really pretty reasonable, and I believe payback is a better way to gauge cost reasonableness. I can't quote those cities, but I've seen $65/day in Chicago prime downtown areas - and that was in 2007. So even $50/day * 700 spots (and yes they're filled or possibly even over-subscribed (pay for x hours but leave and it gets re-rented) * 250 work days per year is over $8.75 MILLION per year! Not a great payout period but for a public/semi-public work probably not untenable. Except... We're not Boston!
Only the Webbs or folks with that wealth could afford to pay this to park, so one would have to see what the going rate for hourly/daily parking is to see what a reasonable price for this garage is. That WOULD be higher than on street/adjacent open lots because it's covered, a great location, etc. So folks likely would pay a bit more to park there... but not $50/day!
Upshot: their costs are probably higher than some areas due to limestone in the dig. But construction cost won't necessarily have a lot to do with what the market will bear to park there, and payback feasibility should be the best way to determine if the business model is reasonable or stinky. Webb may say you can't do this, the garage must be taken in context of the whole development. The problem there is how the deal/bonds/city/TIFF is put together, not to mention there is no credible reason to believe anything past the garage will be created on a reasonable horizon. At this point, I'd be happy to see the garage on top of which we could still plant grass!

I think that the Lexington market might not bear rates which would make the business model work. According to LexPark, the highest current daily rates are about $12.50 and the highest monthly rates are around $100.

For some reason Joe and the Dud still want a free parking garage. Again the Dud has filed multi-million dollar bankruptcy four times, has two multi-million dollar liens on the CentrePointe Property and still owes the city for lost parking spaces, sounds like junk bond status from any economic perspective. Several underground garages are prefab so what is the delay? How hard is it to lay rebar and forms to pour concrete made right in Lexington at Forbes road and Manchester street?